As Cognite jumps into the next phase of our growth, celebrating diversity all year remains a key part of who we are as a company.

When “Nathalie” joined Cognite, she didn’t know if she should be open about her orientation.  Soon she came across a team member who had put up a small Pride flag on her desk.

“It was a bit of a shock for me,” Nathalie says. “I come from a place where displaying that flag so publicly is pretty dangerous.” [Nathalie’s name has been changed at her request]

A few days later, Nathalie came out to her team. “This is something that may seem trivial to most in Norway, but it was pretty huge for me.” It was the first time Nathalie had come out to anyone outside of her closest friends.

“That small symbol of safety meant that I could be myself at Cognite and show my true colors,” Nathalie says. A few weeks later, Nathalie bought an even bigger flag and put it on her desk for any new Cogniter who might need a sign of safety.

“Diversity at Cognite has been a constant,” says Customer Success Director Hunter Beck.

Hunter has been with Cognite since 2019, and has seen firsthand the effects of our growth across the globe. “Our heightened celebration of Pride this year is emblematic of that growth,” he says.

On June 1st, Cogniters woke to find their internal communication and collaboration tools had turned rainbow with custom icons. Quick diversity facts were placed on each meeting room, and Pride decorations brightened the office. All this was done courtesy of a volunteer Pride crew consisting of queer Cogniters and their allies.

“One thing’s for sure. Every single person walking into the office that first day smiled,” says Project Manager Dina Mikalsen. 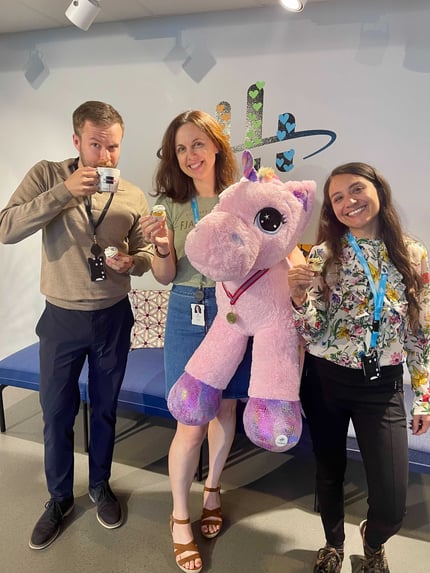 Although that’s a win in itself, the team also wanted to create awareness around unconscious biases and Pride history. “By renaming the meeting rooms and hanging up posters where people usually hang out, we wanted people to feel more engaged in Pride than they did before Pride month,” says Dina.

“Even if we were mostly virtual and distributed again, this year I feel we had the chance to engage even more people and solidify our stance as a company that supports the queer community,” says Hunter.

One of those virtual initiatives was a daily inspirational Slack post. Each day in June a Cogniter would share what inspires them about Pride month, then choose a new Cogniter to write the next day’s post.

“Although I was super supportive of the idea,” says Hunter, “the cynical part of me expected it to die off after a few days.” The posts ended up taking off organically. Throughout the month Cogniters wrote about queer heroes, music, activism, and more, each post paired with a personal connection.

“I was really surprised!” says Hunter. “I found myself looking forward to each new post. Each one was so unique and showcased different facets of Pride I never knew existed!”

Internal Culture Manager Maria Sviggum agrees. “Hearing others share stories leads to reflection and, in turn, action,” she says. “I am so proud to see Cogniters embrace June as Pride month, getting together to organize events, decorate, and most importantly -- talk about it.

And we’re not done. “I think the best part was realizing, then deciding together, that it's only the start,” Maria says. “It’s not just a one month thing.”

At Cognite, diversity and inclusion are a key part of togetherness

2021 is an important year for Cognite. We’re a unicorn. We’re diving into our next phase, and we’re growing like never before. To commemorate Cognite’s commitment to togetherness year round as part of our DNA, a progress flag will be displayed near office entrances throughout Cognite. 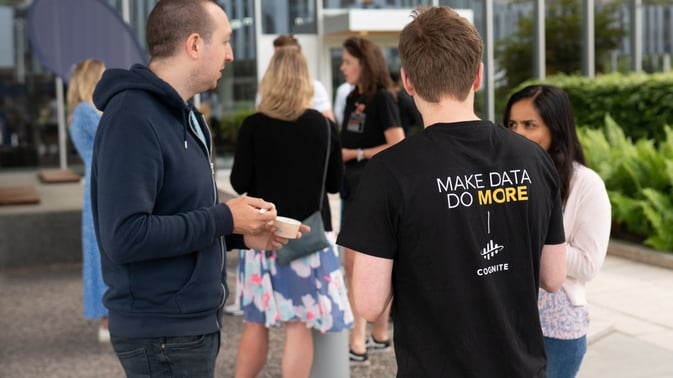 “However large we grow, there are things that never change,” says Cognite CEO John Markus Lervik. “We’re global. We're free to speak our minds. We’re curious. We're open. We make an impact. And we do it together. It’s important that every new Cogniter that comes through our office doors knows that.”

Cognite CEO: Now that the world sees the cracks in its digital foundation, let’s fix them
Value Creation
Asset-intensive industries are on the brink of their ‘iPhone moment’, thanks to Industrial DataOps
Value Creation
A Game of Data: Five data challenges in commodity trading
Value Creation