Ørsted is a multinational power company based in Denmark. They develop, construct and operate green energy solutions that combat climate change. About a decade ago, they were one of the most fossil intensive energy companies in Europe, but now are among the most sustainable power companies in the world. We spoke with Simon Foss Børresen, Head of Advanced Analytics at Ørsted, on what role digitalization plays in the wind industry.

Listen to the full episode below or read on for the highlights.

Since 2017 Simon Børresen has been involved in data driven improvements of offshore wind operations and defines himself as a changemaker, who focuses on bringing cleaner and cheaper energy to market and customers.

“A big part of the transformation was scaling from being a Danish utility firm to becoming a global player in the offshore wind market,” explains Simon. To successfully scale, Ørsted incorporated digital tools into all parts of their business.

Digitalization as a part of the design phase

At Ørsted, digitalization is playing an important role before the wind turbines are even built. The company has found digital solutions essential in order to make the  wind farms scalable, efficient and effective. This has helped them on everything from the design of wind farms, the layout, the placement and quantity of all wind farm elements, physical and digital, allowing Ørsted, even in early design phases, to get the highest possible output at the lowest possible cost.

“As a foundation, we have quality as a maintenance standard,” Simon says. By getting insights into the turbines before they break, it allows them to optimize the availability and performance of the wind turbines. This is to ensure that when the turbines are spinning, they achieve maximum possible output, and again at the lowest possible cost. 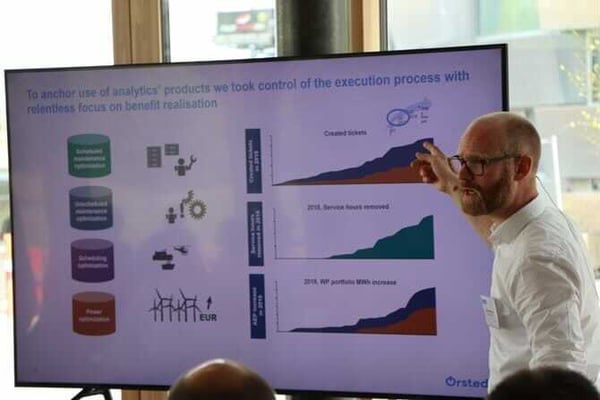 What to digitalize and how to do it

“It is about solving actual and recognized problems for our customers such that the digital solutions are helping rather than being a burden,” says Simon.

Instead of focusing on how many products they make, Ørsted relentlessly tracks impact, focusing  on effectiveness rather than efficiency of the teams. They therefore measure success once they have solved a problem.

The wind industry is simultaneously growing and maturing. There is a lot of potential in digitalization if you know the systems that you are working with and the problems to tackle.

As companies are exploring new areas for offshore wind, the industry is also adapting to new local communities, cultures and geography

Globalization of the wind industry offers a set of new challenges. “Now it's no longer just technology, it's also culture and engaging with people from different backgrounds, speaking very different languages and having very different working styles,” states Simon.

It is essential for companies and stakeholders in the wind business to have a broader, contextualized understanding, not just of the technology, but of the entire landscape, including communities, emphasizes Simon. He explains that we have to understand the contexts of our products and be aware of the role and process in which people engage with them. An understanding of the actual systems is also important, he adds.

“You need to be able to understand the complexities but you also need to be able to simplify matters, such that you can collaborate with cross functional and cross organizational teams, because not everyone is an expert in every part of the business,” Simon says.

Preparing for the future of wind

Within 10 years, Ørsted has transformed itself from a company focused on conventional energy to one that is seen as a rising leader in renewable energy. They are taking action towards their vision of creating a world that runs entirely on green energy. By 2023, Ørsted pledges it will no longer use coal in their power plants, and by 2025, their offshore wind operations will be carbon neutral.

In Simon’s view, creating a world that runs entirely on green energy, requires integrating wind power with different energy systems to target both the energy and industrial sectors, which will ultimately, hopefully, map out a way towards a more sustainable future.

Listen to Cognite Convos on Spotify or Apple Podcast.